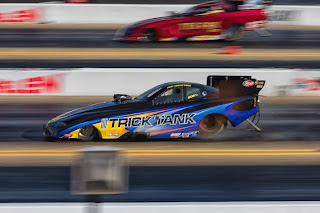 I remember when I was a kid, I traveled up and down the West Coast with my Mom as she took pictures for various Drag racing magazines, News Papers and probably whom ever would buy them.  Personally I don't know how she did it but I do know as a kid this was a dreamland.  I loved race cars and I ws in the middle of Drag racing like most kids will never know. I rode bikes with Ashley Force I sword fought with Scott Kalitta, I was taken to victory lane with John Force. I still cant believe I was able to do half the things I did.

My Mom to me was one of the greatest Drag racing photographers there ever was (yes I'm biased) the only thing is she had me.  She couldn't put into the career she loved like the other photographers could because as a single parent she had a greater responsibility.  So as I got older it became harder and harder for her to pursue that career.  Until she finally stopped.  She did transition into other motorsports but I don't think it was where her heart was. 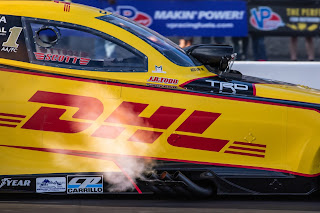 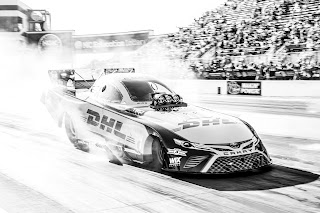 As I've gotten older I've thought about what she put on the back burner for me, a part of me wants to finish what she started and take this gift she gave me to where she should have gone.  A year ago I went to the Drag races here in Charlotte at the Zmax dragway.  I of course brought my camera but I was stuck in the stands.  I had tried to sneak onto the sidelines but never made it very far. I knew there was something I had to do.  So soon as I left the track I started thinking of ways to get out there on the starting line.  I went straight to the top, and reached out to a friend that runs the drag strip. She said absolutely and to remind her in August. I did just that and she fulfilled her promise but I soon realized she was giving me tickets to her personal family suite.  As nice as that was it wasn't where I wanted to be, I needed to be on the starting line.  So I reached out to a friend whom worked for Don Schumacher Racing.  She never hesitated. She gave me the email to the person at NHRA that I needed to email.  Thats where I thought the road stopped, she sent me the request form and on that it said "Who am I shooting for?" "what credentials do you have?" Basically why in the world would they let someone like me shoot there? I thought that was it but my buddy Brian didn't let me take that as a no. He said send it, he went over me and reached out to Ashley himself, she said no tell him to send it we've taken care of the rest.

So I did.  A few days later I got an email with full on photo credentials right down to the parking pass just like my Mom used to have plastered all over her old Mazda.  Yes I about lost it at that moment but that wasn't the pinnacle moment.

I showed up at the track at about 11AM on Friday. I picked up my credentials and walked in.  Even though I have been to a hundred Drag races this one felt like the first time.  It felt like I was in uncharted territory. I was nervous.  Probably the first time in my life I've been nervous at a track.  That feeling of not belonging wouldn't go away but race cars were going down the track so I went and walked past the security guard that had turned me around the year before.  I went to starting line and put my bag down, grabbed my camera and started clicking. 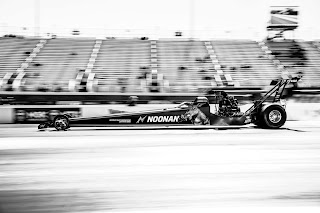 The cars were one of the lower divisions. I don't even know what they were but it didn't matter.  Soon as those cars started up I forgot that feeling....until I got a tap on the shoulder and a fellow photographer said hey you cant stand there. See that yellow tape and the cone down there thats where we can stand.  It was a quick reminder that I didn't belong, yet.  So I moved down there and just tried to stay out of the way of the others.  Soon I was getting the timing down of these Super gas cars.  The came Top Alcohol.  They are loud compared to most other race cars. One by one they went by and I got the timing down.  I looked at the photos I had taken and knew I wanted to find something different.  So I changed lenses and focused on getting them going by.  Its tough the cars are so fast but its the vibrations that are what really make it tough. 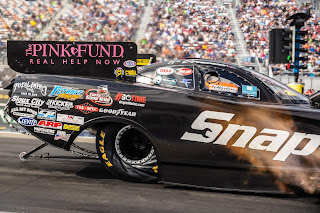 I noticed that the other side of the track I could get closer to the cars.  I moved over there knowing the Nitro cars were next.  I dropped my bag and waited for the track crews to get the track ready.  The Funny cars were first.  The cars fired up and it was a feeling that I will never forget. If you've never been to a drag race I strongly recommend you go just once.  The cars with over 11,000HP will shake you to your core. They will rattle your teeth to where its almost unbearable.  Now try to take a picture of one of them as they go by. In less than a second they are going over 100MPH. Let that sink in.  The thing is I didn't have much time to learn, I needed to get it done. I don't know how but I took to them, even more so than my camera, as some of the photos were sideways because my camera couldn't tell if it was upside down or right side up.  Every pass I felt like I got better and better.  Then Cruz Pedregon came up.  I had learned that the wide angle was giving me some really cool shots.  As he hit the gas I panned with him. Taking about 7 pictures in a second. One of which was this totally badass shot, flames coming up from the pipes and the tires trying to rip the pavement up.

Once the Nitro classes were done with their first round I went back to the pits and got to watch the crews up close, rebuilding them in their 90 minute time frame.
These guys are incredible. They literally rebuild these cars from the ground up after every single pass.  Everyone knows their role. Every crew member taking each bolt as meticulous focus. The next time I go this is going to be the story I focus on but I'll leave that for next time! 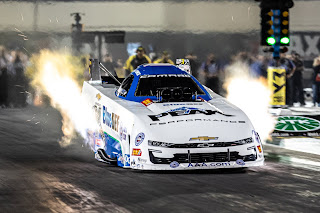 So round two.  The sun had set. The cold air had moved in, I found my spot amongst all the other photographers and waited.  Finally the sound of the starter spinning over the motors could be heard.  The crowd all stood up and the cars began to roll through the water box before they finally hit the gas to do their burnout.  Flames 6 feet high are shooting out of the header pipes. The cars were flying by me but I wasn't phased. I was getting some shots that I loved.  I didn't feel like I didn't belong anymore.  I felt like I was exactly where I belonged.  I knew the camera setup I wanted, I made changes on the fly. I got some amazing shots and even ones that the teams liked. One of the Funny Car drivers even saw my photo of him on Instagram and asked if he could buy it!  This was the moment I had dreamed of and I don't think Ive ever felt closer to my Mom then at the moment John Force made his pass.  John was the one that gave my Mom her first opportunity to shoot, he's always been a hero of mine just knowing where he came from and all the doors he had to knock down to become the greatest NHRA driver ever. 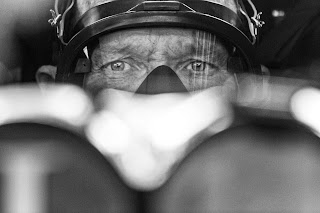 Just shooting the cars wasn't the only thing I wanted to capture though. In my mind I have always been fascinated by the photos my Mom took of the drivers with their helmets on and strapped in the cars. I had tried all weekend to get the shot in my head but I didn't have a long enough lens to get the shot I envisioned.  So with Sunday getting rained out and me having to work I wasn't sure I'd be able to get it but luckily my boss Norman is awesome and let me leave early enough to catch the last two rounds. As I said earlier I was there shooting "for" Don Schumacher racing and their driver Jack Beckman had made it to the Finals. As they got ready to start the car Jack was sitting in the seat and thats when I saw it. I moved over to just in front of the car, they fired it up and the crew was doing their thing.  I waited for Jack to look up and got it. This photo is the one I had dreamed of all weekend and I got it!

This was the night where I found myself as a photographer, the questions of if I belonged were gone.  That doubt of if I could even get those shots were gone and I cant wait to go back and do it again!  Hopefully once all this Covid is over and life gets back to normal the drag racing community will be back stronger than ever! To those of you that helped make this dream come true I can never thank you enough! 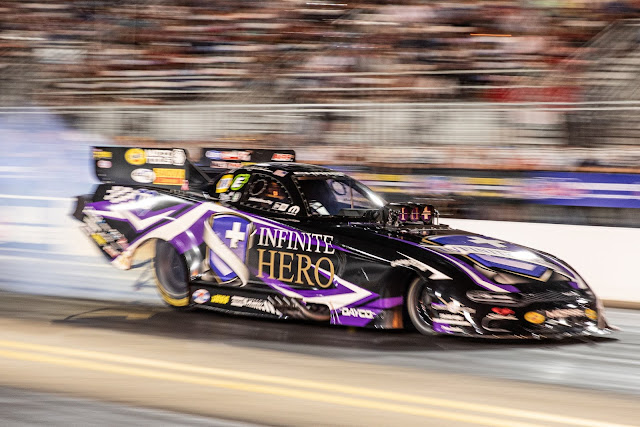 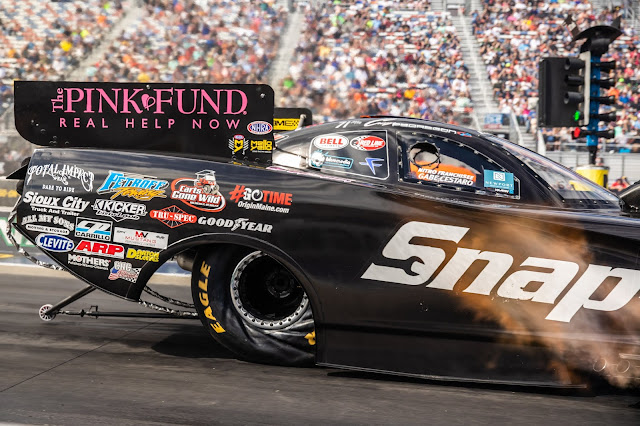 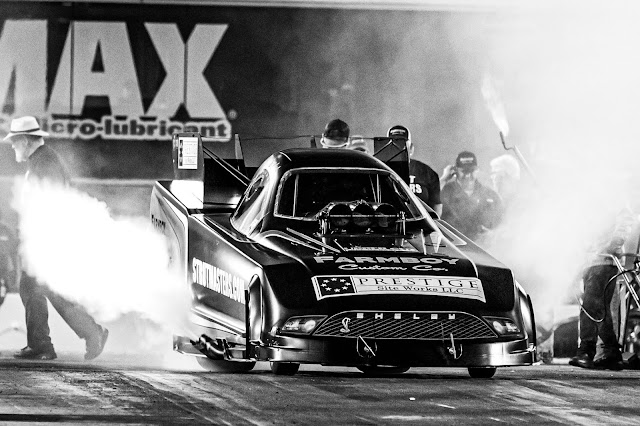 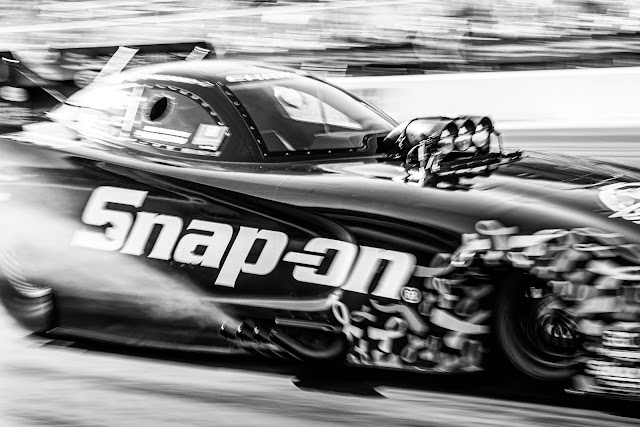 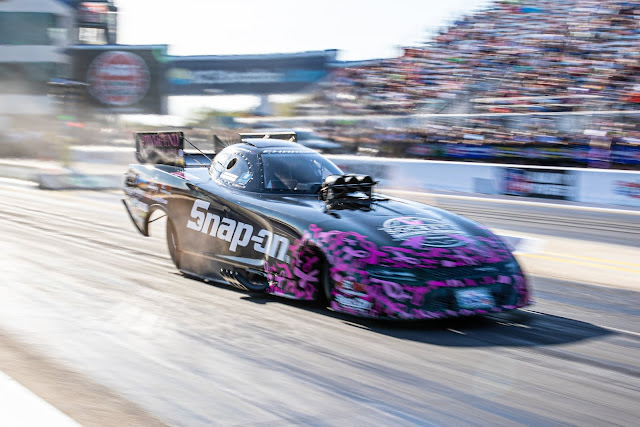 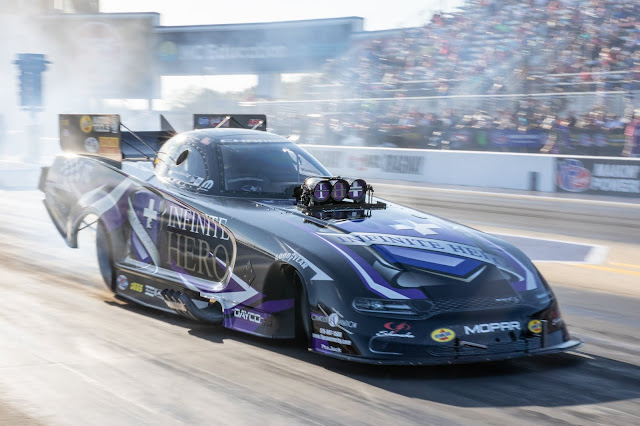 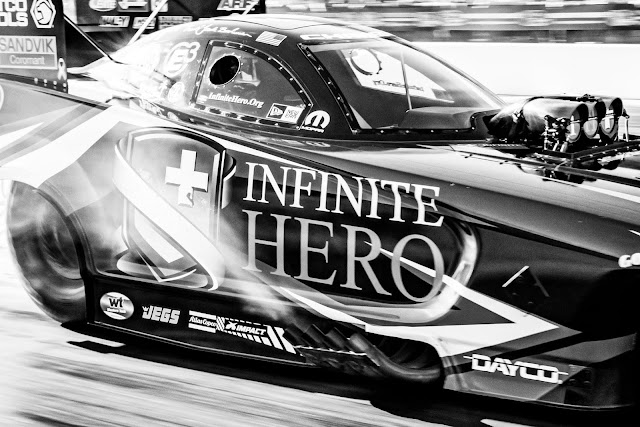 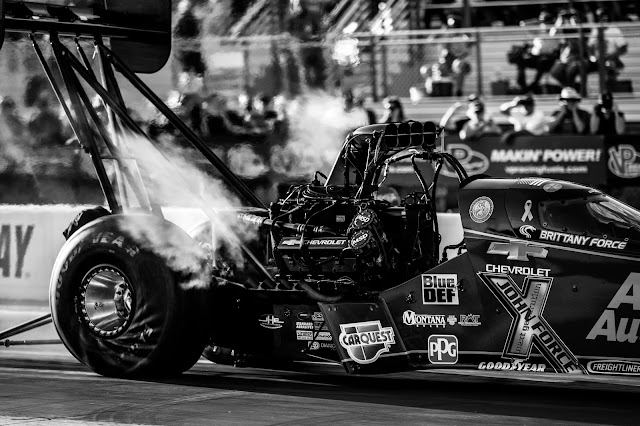 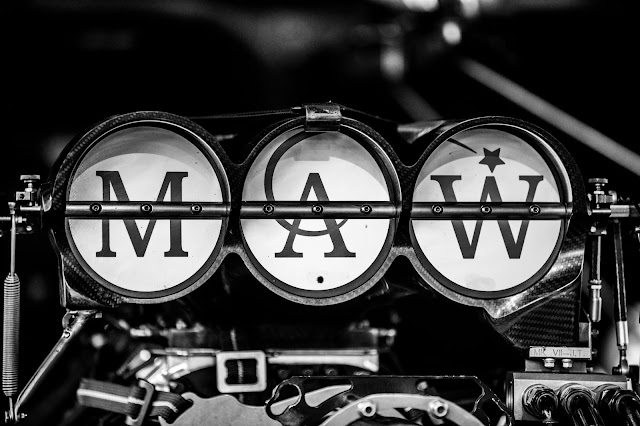 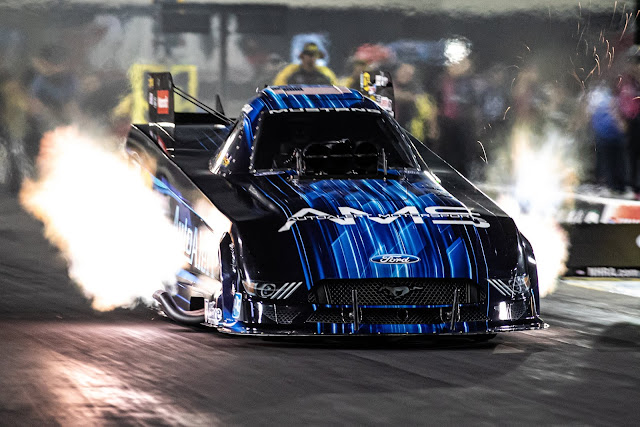 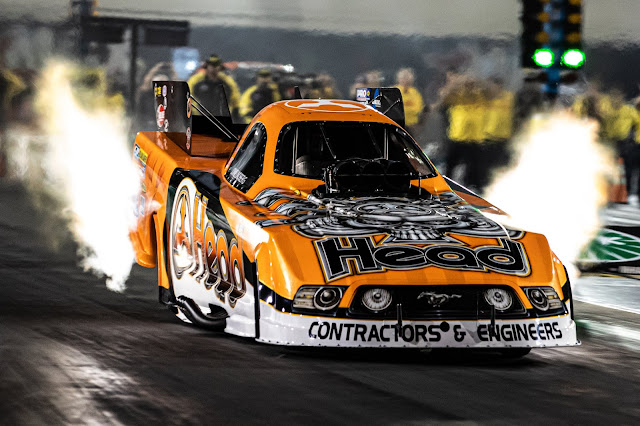 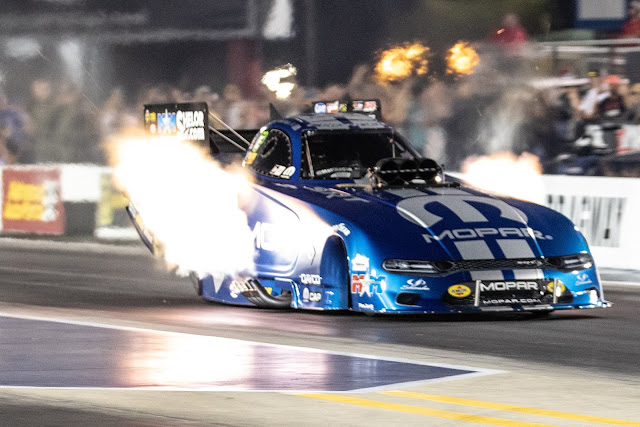 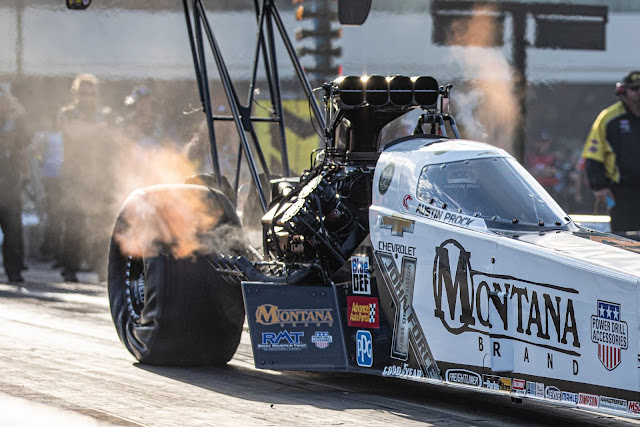 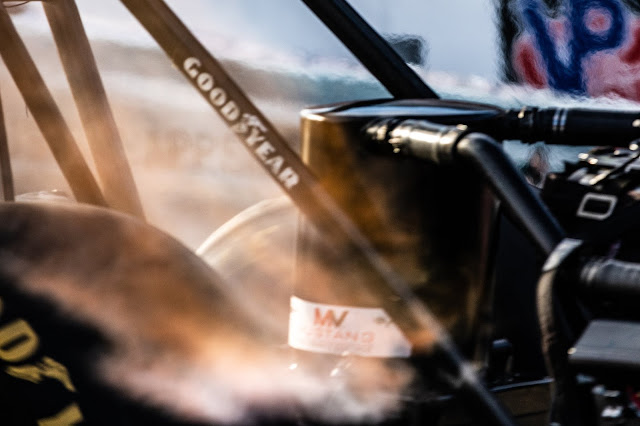 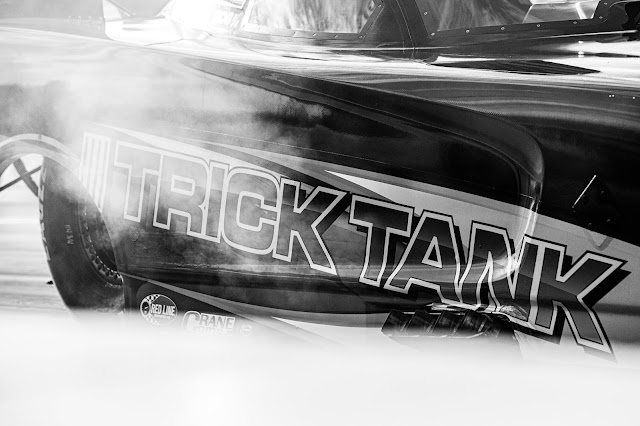 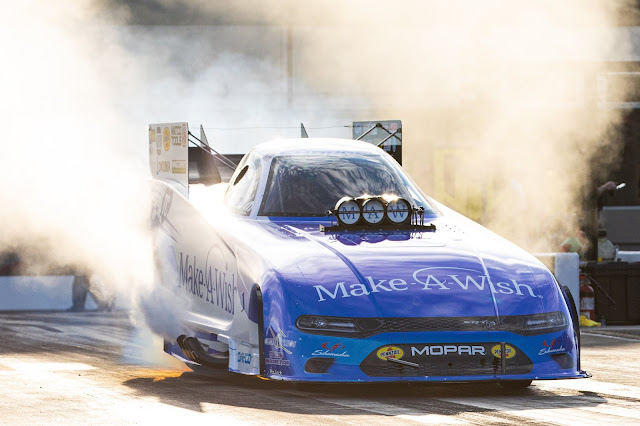 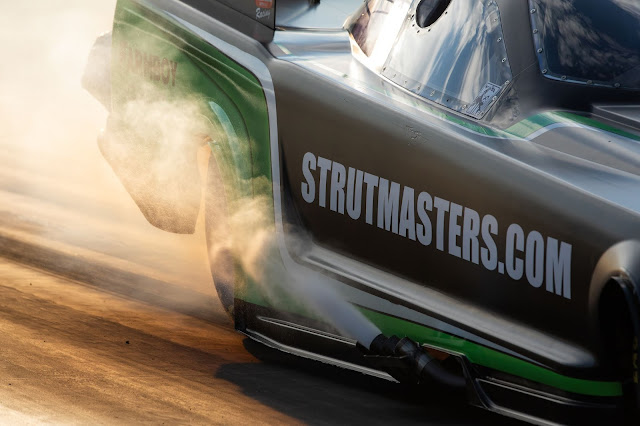 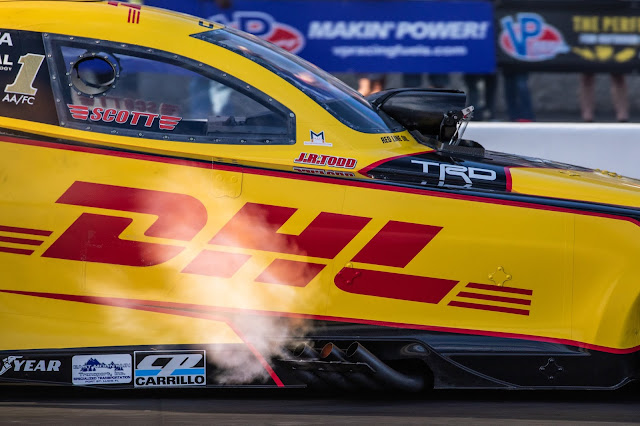 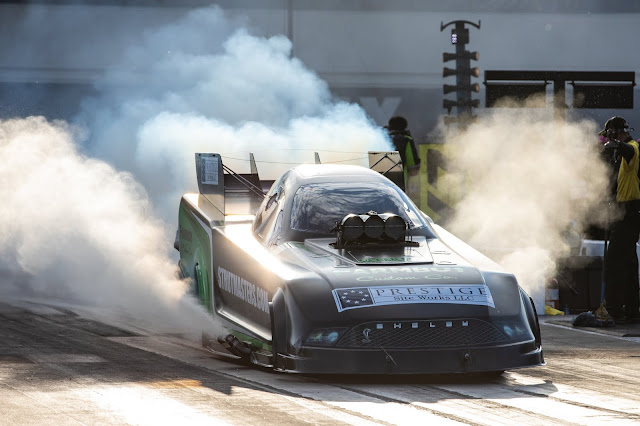 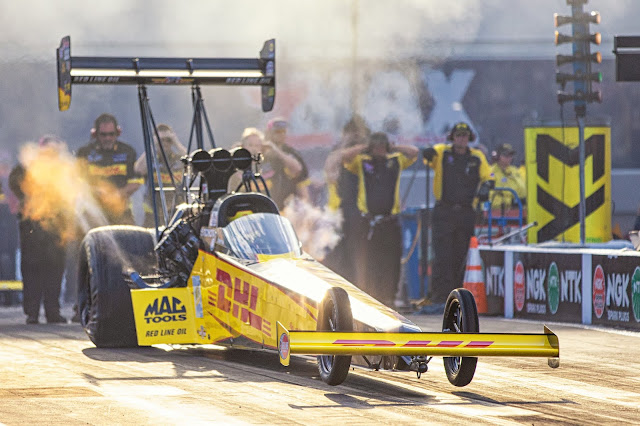 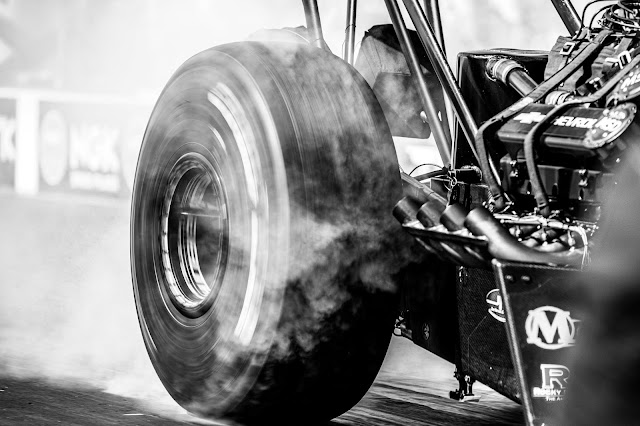